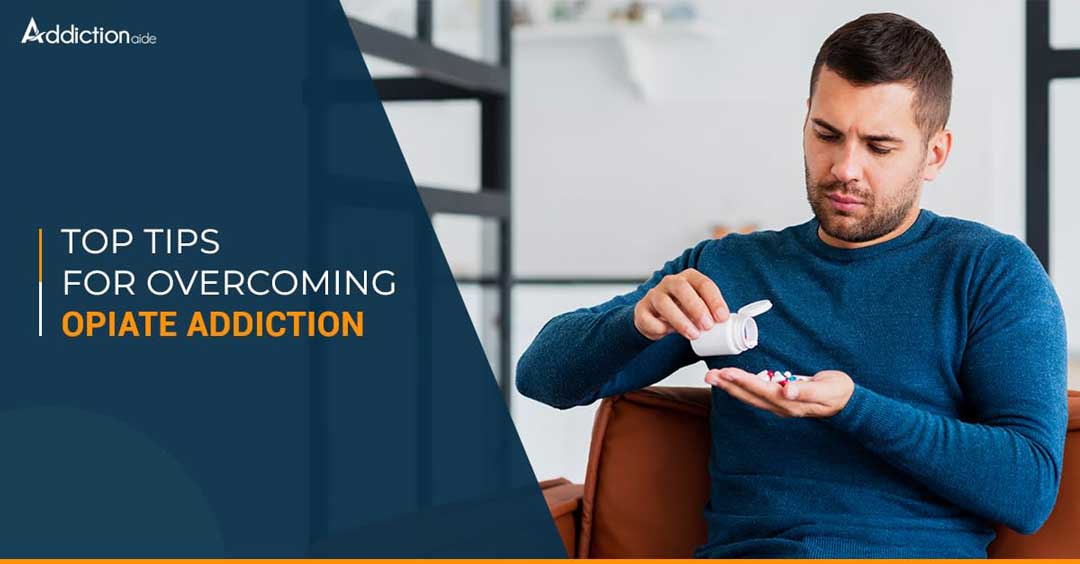 The United States is firmly within the grip of an opiate addiction epidemic. Millions of citizens are addicted or at risk of becoming addicted to an opiate and opioid pain medications, and these drugs are killing thousands of people every year.

Not only are these drugs readily available and highly addictive, but they also cause painful and uncomfortable withdrawal symptoms. This is one of the reasons so many addicts struggle to kick their addictions and attain sobriety.

If you’re addicted to something that causes you great distress when you stop taking it, and you’re always a phone call and a short-drive from acquiring more, it can be very hard to quit. However, there are some things that can help you, things that could take you one giant leap towards sobriety.

Don’t Use Other Recreational Drugs

An addict’s first thought when quitting opiates is to use another drug in its place, but they can cause more problems than they fix. Alcohol, for instance, may help you to get to sleep and to beat insomnia, but it will cause digestive problems and impact your mental and emotional health. What’s more, while alcohol can help you to get to sleep quickly, the sleep you get will be poor and short-lived.

Benzodiazepines are also common. These drugs can seem like the perfect choice. They help you to relax, curb anxiety, promote restfulness, and may even help with restless legs syndrome. However, they are incredibly addictive. The impact heavily on your respiratory system, increasing the risk of death and other serious problems.

You’re in a very weakened state emotionally when you quit opiates. If you’ve been taking something that helped you with this, something that made you feel great, you may convince yourself to keep taking it, swapping one addiction for another, one that is even worse. Stimulants can also mess with your body and mind during withdrawals.

Generally speaking, you should avoid all recreational drugs and stay clear of anything that is addictive.

While it’s always a bad idea to use addictive, psychoactive drugs, the same can’t be said for all medications. There is a multitude of OTC drugs that don’t leave a heavy imprint on your mind or body but can help to alleviate the symptoms of opiate withdrawals.

Imodium (taken when needed): This popular OTC drug actually contains an opioid, but it’s one that doesn’t cross the blood-brain barrier, will not make you “high”, and will not impact on your recovery. What it can do, however, is put a stop to those stomach pains and diarrhea, which can make withdrawal very painful and uncomfortable.

One of the biggest debates surrounding opiate addiction concerns inpatient vs outpatient treatment, whether to enter a clinic and receive close, around-the-clock care, or whether to try and get help at home. But the real question should be, “cold turkey or taper” and the answer is nearly always the latter.

Cold turkey is when you quit from one day to the next. It has its benefits, namely the fact that the acute withdrawals will often be over within a week. In theory, you can end a decade-long opiate addiction simply by taking a year off and suffering just like you would if you had a really bad flu or stomach bug.

But it’s more than that. Yes, you feel terrible, but you also have cravings to contend with. And when your will is at its weakest and you’re aching from head to toe, you’ll convince yourself to relapse and in an instant, you’ll undo all that hard work. Cold turkey is also out of the question for anyone who works a lot, has a busy family life, and simply can’t afford to take a week off.

A taper, on the other hand, is slow, relatively painless, and will not impose on your life. It will also allow you to come to terms with sobriety and ensure that you’re ready for the new, sober version of yourself when the taper finishes. The goal of a taper is to gradually reduce the amount that you take. For instance, if you take 200mg a day, then reduce to 180mg for 3/4 days, then 160mg for the same time, then 140mg, and so on.

The trick is to reduce as quickly as possible but to keep the amount low so that you can avoid the debilitating withdrawals.

Lifelong opiate addicts who have been sober many times and relapsed just as many times will tell you that the hardest part of withdrawals is not the acute stage, but the period that comes after. That’s because while the acute stage is very uncomfortable, it also occupies your mind. You’re too focused on your pain and discomfort to be bored. It sounds strange, but it’s true.

Once this period ends, however, then a stage of complete malaise and boredom takes over. You can’t attain any joy from anything; time drags as it has never dragged in your life, and the only thing you can think about is your drug of choice. This is the point that most recovering addicts relapse.

To get through this, you need to be prepared for it and the best way to prepare is to fill your day with things that will keep your mind occupied. If you’re a big gamer, buy a few brand-new games and don’t open them until this period kicks in. If you like to watch films, buy a stack of DVDs. You can also go on a vacation or take up a new hobby.

The goal is to keep busy and to make sure those hours pass completely drug-free.

Another way to get through the “boredom:” period and to help you through a taper is to exercise. Medication for recovery is something you’ll see recommended by many experts. They tell you that it’s all about triggering a natural release of endorphins, but in reality, this is just a small part of it.

Sure, the endorphins help, but what’s the point of a natural rush that lasts just 10 minutes when you have an entire day to kill? The real goal here is to give you something to look forward to, something to move towards. If you’re fitter, healthier, stronger, more defined, etc., then you’ll be less inclined to relapse, knowing that all of those improvements will disappear.

Fitness can become an obsession in itself and while no obsession is healthy, it’s much better to be addicted to fitness than opiates, especially if the former helps you get over the latter. So, start working out, start exercising—focus on transforming yourself into the person you want to be, because that’ll give you the incentive you need to kick the drugs and continue on that journey.

Conclusion: Slow, Painful, But Worth It

One of the biggest issues that addicts have is that they refuse to believe sobriety is worth all the hassle and pain. They envisage being bored all the time and struggling to get through social situations; they have been using drugs as a crutch for so long that they can’t imagine life without it.

The truth is, you only feel that way because you’ve forgotten how good it feels to be sober. Sobriety is a distant memory and you’re equating it to the way you feel before you take your first hit in the morning, as opposed to the way you feel when you haven’t taken drugs in months. These are two different feelings, two completely different states of mind.

The first is a feeling of desperation, a chaotic, conflicted feeling where the only thing you can think about is getting high. The latter is a clean, natural feeling where your brain is not occupied by drugs or the thought of getting high and instead you focus on the good things in life.

It’s a long road and there will be obstacles, doubts, and conflicts on the way, but it’s one well worth taking.