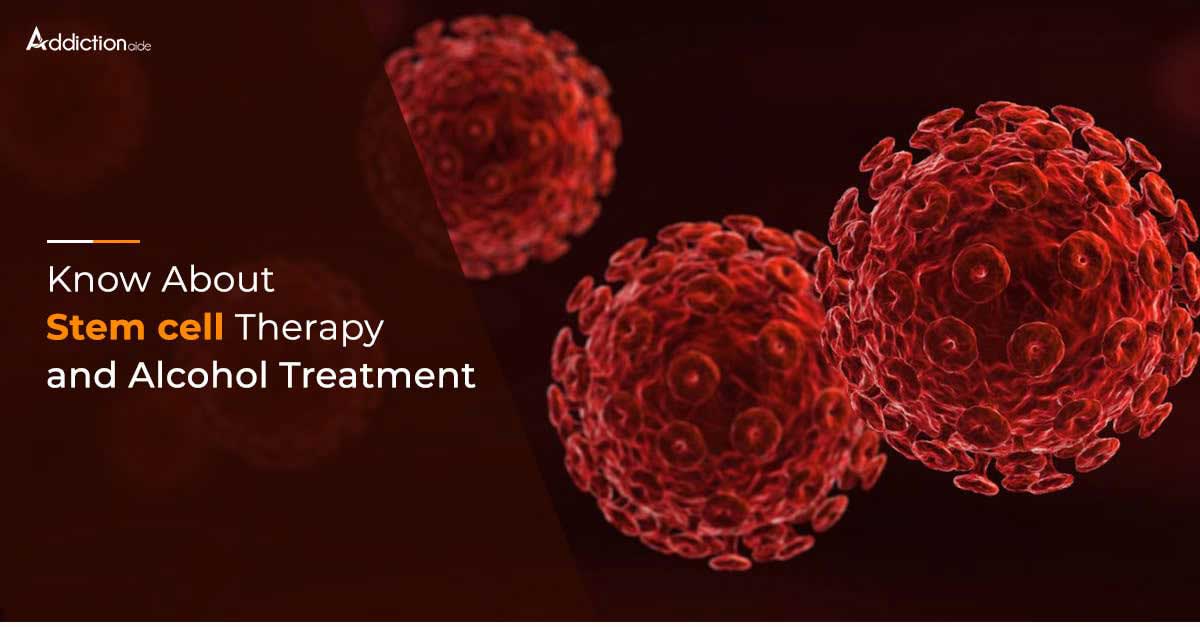 Stem cell therapy is the latest advancement in treating alcohol addiction. A study says one in eight adult Americans is an alcoholic. Alcohol is the most commonly abused substance in the United States. According to the National Institute on Alcohol Abuse and Alcoholism(NIAAA), it has been estimated that about 88,000 people(including men and women) die from alcohol-related ailments. Making alcohol abuse the third leading cause of death in the United States. It is imperative to note that alcoholism is a chronic disease and drinking alcohol increases the risk of cancers in the mouth, esophagus, pharynx, larynx, and liver.

Hence substance abuse treatment is required. Treatments include detoxification, counseling, cognitive behavioral therapy, family therapy, behavior therapy, psychotherapy, and group psychotherapy. But getting people away from alcoholism is the biggest task, there where many alcohol rehab centers which can help you with the list of alignments to help them recover from addiction. One such alignment is stem cell therapy. There was much research on this topic, how it would be beneficial to mankind, and how efficiently it can help a person who wants to get rid of addiction. Animal studies proved that stem cell therapy significantly reduced alcohol intake and further clinical trials are in progress.

Here in this blog, we are going to have a discussion about what is stem cell therapy, the advancements in that particular field, and how efficiently it helps to recover from addiction.

What Are Stem Cells?

Stem cells are found in both humans and animals, which can be divided into many different types of cells, to produce more of the same type of stem cells. This can be evidence that it can heal itself and helps to regenerate the old damaged cells. There are two types of stem cells:

At a developmental stage of an embryo, these embryonic stem cells were derived before the time that implantation in the uterus would normally occur. The process of fertilization normally occurs in the oviduct, a series of cleavage would be formed after a few days, which makes the embryo to travel down from the oviduct to the uterus. At this stage these cleavages are undifferentiated and they won’t act or commit particular into any form or like any specialized form of cells that were present in adults.

These cells are undifferentiated cells found throughout the body, which can be divided to replenish dying cells and regenerate damaged tissues. It is also called somatic stem cells, they can be found in both children and as well as adults.

Research into adult stem cells has been fueled by their abilities to divide or self-renew indefinitely and generate all the cell types of the organ from which they originate — they potentially help in regenerating the entire organ from a few cells obtained.

Stem cells have emerged as the main ingredient in regenerative medicine as they are malleable & regenerative. The specialty of the stem cells is that they can multiply, repair, and replace other cells in the human body. Therefore stem cells repair and rebuild the degenerating tissues. Stem cells can multiply and renew themselves for long periods. They can proliferate in the laboratory for months and can yield millions of cells. Because of the salient features of stem cells, they are used in various therapies and in regenerative medicine.

Recent research has found that stem cell therapy can treat genetic diseases like drug and alcohol addiction. For those with a family history of addiction, this stem cell therapy ends their addiction. Here the healthy stem cells are transplanted into the infected area. Hence doctors can change the brain chemistry that offers a key for recovery from alcohol addiction. The transplanted stem cells are capable of changing the chemical composition of the brain and restores the affected area with new cells.

This has been proven and tested in the laboratory rats bred to drink alcohol. These rats are injected with mesenchymal stem cells, where the rats subsequently reduced the alcohol intake by 90%. Chronic consumption of alcohol causes inflammation in the brain and peripheral nervous system. This inflammation increases the risk of relapsing and the anti-inflammatory properties of the stem cells reduce the inflammation thus preventing a relapse. This stem cell therapy is being tested for other forms of addiction and human clinical trials.

Many recovery treatments or samples were tested on rats and monkeys before testing it on humans. Here were are going to narrate research made on monkeys and we can able to see its effects on alcohol addiction. Why this particular research? The advancement in industry and the treatment techniques were growing daily. According to the latest research, even these stem cell therapy methods to have some viability.

This research is made on monkeys since it is the more reliable choice. Both humans and monkey’s brains were developed in similar ways.

They chose four monkeys and gave them alcohol through the citrus fruit they eat for a period of one year. They received the drinks for an hour a day over this time period to mimic the effects of binge-drinking. At the end of one year, these animals were dissected to look at how the brains were differed compared to those monkeys who didn’t receive any alcohol.

There is one criticism in the above-mentioned study, however, the monkeys were given a lot more of alcohol throughout the observation period i.e one hour gap, whereas in humans they won’t consume this much of alcohol say particularly for a week.

In this study, the researchers found that they observed fifty to ninety percent fewer stem cell availability than those monkeys who do not consume alcohol. The stem cells that were significantly reduced were those in the hippocampus part of the brain. This part of the brain plays an important role in memory and spatial skills. Essentially, the alcohol ‘kills off’ these crucial stem cells in the brain.

Another study that was conducted by utilizing rats, they permitted rats to abuse alcohol.

According to research based on 2017, rats exhibited that a specific kind of adult stem cell called mesenchymal stem cells (MSCs) show hope for controlling alcohol use diseases. The research recorded that chronic alcohol abuse creates swelling and neurodegeneration which scientists believe contributes to the disorder of alcoholism. This initial research seemed to prove that rats developed to consume high amounts of alcohol curbed their consumption when injected with MSCs. Within 48-hours, rats experiencing an IV of MSC decreased around 90 percent of alcohol consumption.

Neurological pain, which has been connected to the disorder of alcoholism, was reduced.

Scientists are presently hypothesizing that MSCs will have many positive impacts on alcohol use disease. For now, they are not ready to tell these effects will pass to people; it is just too early to say. But, they are surmising from the research that MSCs:

It can remain in, at a point, the brain of rats that were developed to chronically drink alcohol.

It can hinder “relapse-drinking,” which involves the consumption of large quantities of alcohol. It does not affect water retention in the body or increase in weight.

Initially, these stem cell therapy were first tested on animals for their accuracy in the path of recovery. As said earlier, stem cells can multiply and replaces the damaged cells. Hence the healing process takes in a natural way and this treatment has emerged as a successful one. Oxidative stress and inflammation in the brain are the two main causes that trigger a relapse. With a single dose of stem cells injected intravenously, this stem cell therapy promotes long-lasting recovery from addiction. This stem cell therapy is a valuable treasure for humans battling alcohol addiction. Further research and trials are carried out by the scientists for more intensification. Decidedly, we can say that stem cell therapy will be the future for alcohol and other addiction treatments. Not only this Stem cell therapy plays a major role in the addiction recovery process, but it also has its unique significance in all the field to enhance the treatments and give a better life to the people who were suffering.

Addiction to alcohol is very dangerous since it affects both physical and mental health. Taking an initial step towards addiction recovery is tough, but when you push yourself to become a sober person, it makes the door open for your healthy life, even you will get some better options like stem cell therapy to cure you genetic factors too. To know more about alcohol treatment centers that offer a wide range of stem cell therapy visit the addiction aide website or contact us to explore more.

8 thoughts on “Know About Stem Cell Therapy And Alcohol Treatment”