Is Ibuprofen Addictive? Facts & Side Effects 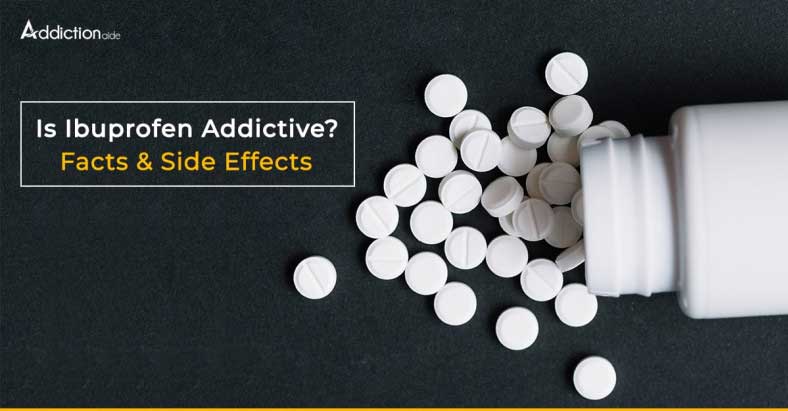 Ibuprofen is a medication that falls under the class of non-steroidal anti-inflammatory drugs. It has analgesic and fever-reducing effects and acts in the body by decreasing the substances causing pain, fever, and inflammation.

Ibuprofen is available in prescription as well as in non-prescription form. The physician-prescribed ibuprofen usually comes in a tablet form. Concentrated liquid drops, chewable pills, and liquid suspension are the other variations of ibuprofen prescription medication. Generally, people take non-prescription ibuprofen to manage mild pains like menstrual cramps, headaches, toothaches, and the common cold.

This is when they tend to face serious ibuprofen side effects if consumed without discretion or in more than needed amounts. Under medical prescription, you are allowed to take as high as 3200 mg per day. But for over-the-counter use, your consumption limit is only up to 1200 mg per day, approximately. Otherwise, you may succumb to ibuprofen’s long-term side effects.

[Tweet “Though Ibuprofen is not physically addictive, an individual may become physically dependent on it to maintain their activity level.”]

Individuals that prefer to take painkillers have to be cautious with ibuprofen. You may use it to manage your mild to chronic pain in your back, joints, neck, or to recover from arthritis and injuries. However, this long-term pattern can lead to addiction.

Although studies strongly suggest that ibuprofen in itself may not be physically addictive, there is a greater chance for an individual to become dependent on the drug to manage their pain and maintain their normal activity level. Once you recognize addiction, it may take a while to get back to the normal stage as you fight ibuprofen withdrawal symptoms.

In the beginning, you may take ibuprofen to alleviate mild pain. But once you get the desired results, you start taking it on a regular basis.

Soon, days turn into weeks and months, and this pattern leads to a risk of ibuprofen dependency. So much so, that you observe that functioning normally in your day-to-day life without its help becomes more and more difficult.

Meanwhile, you may fail to notice the ibuprofen side effects that creep up slowly. One of those seemingly innocent results of the regular intake of ibuprofen is emotional pain.

Ibuprofen-dependent persons have this bugging psychological need to anesthetize the pain instantly with the drug. Suppressing this urge even for a little time can cause huge distress to the addicted persons.

Even if you take it upon yourself to discontinue the unnecessary use of this powerful medication, it may cause physical risks and hazardous consequences, including ibuprofen withdrawal headache.

Needless to say, you need to seek professional help to address these issues and get rid of the dependency on ibuprofen.

The below statistics reveal more information regarding the risks associated with the use of Ibuprofen:

According to the Canadian study, published in the Canadian Medical Association Journal, thousands of pregnant women suggested that taking ibuprofen is 2.4 times more likely to miscarry than those who are not taking the drugs.


Many overdose experiences have been published in medical literature, though the recurrence of life-threatening complexities from Ibuprofen overdose is minimal. 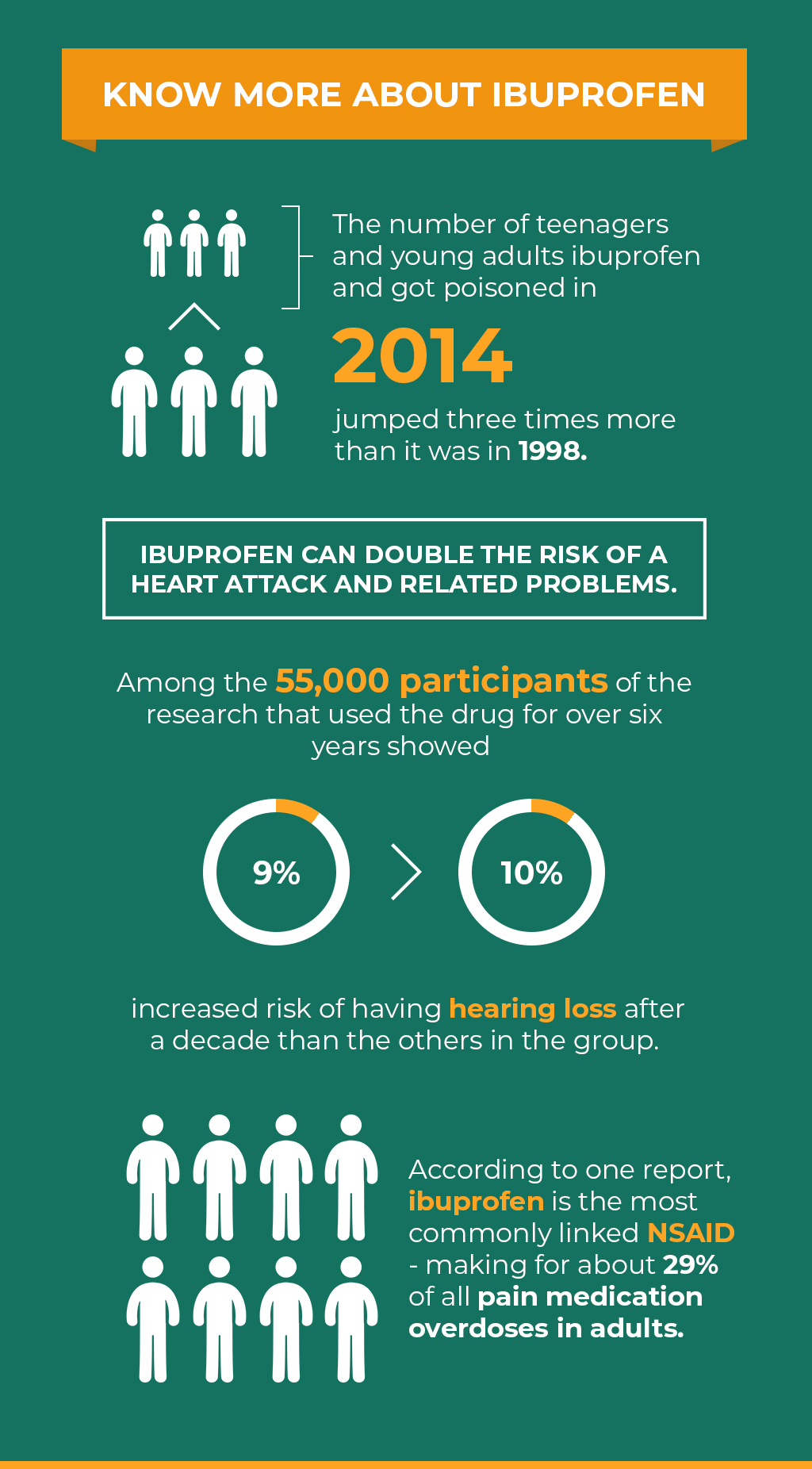 Here are some fast facts on Ibuprofen:

An individual begins taking Ibuprofen to manage mild pain and days after it may lead to a risk of dependency on it, causing a feeling for the person that they cannot function normally without the drug Ibuprofen. In some cases, the regular intake of Ibuprofen may cause emotional pain as well. The dependency on Ibuprofen by the persons who are emotionally disturbed as a result of a psychological need to anesthetize the pain.

Though Ibuprofen is not physically addictive, the continued use of it may cause physical risks & hazardous consequences. To halt the dependency on Ibuprofen, it should be addressed professionally.

Side Effects Of Ibuprofen

Ibuprofen is not suitable for persons who are sensitive to NSAID, who have a peptic ulcer, and who have severe heart failure.

Interaction of one drug with another medication may cause adverse effects:

Drugs used for high blood pressure, or hypertension. Ibuprofen, when taken in combination with antihypertensives, can sometimes lead to a rise in blood pressure.

Diclofenac, indomethacin, or naproxen and other medications are painkillers. If you are on these drugs, it is not recommended to use ibuprofen alongside these.

Ibuprofen negatively reacts with the said drugs, since they are already anti-inflammatory. Taking it would increase the chances of stomach bleeding.

Most people are in the habit of downing aspirin to control mild pain or for headaches. Sometimes, it is also used as a blood thinner to prevent a clot-related stroke since it has properties that can stop clotting.

Patients who use low-dose aspirin should not take ibuprofen as it reduces its blood-thinning effect. Furthermore, both these drugs taken in conjunction can cause serious ibuprofen side effects like stomach bleeding.

Digoxin is taken to treat atrial fibrillation. Ibuprofen and digoxin, taken together can increase the risk of high blood pressure.

This is often used to treat some mental disorders. However, when you combine it with ibuprofen, it can become tougher for the body to discharge lithium. This may result in dangerous levels of lithium in the body.

This drug is used for treating cancer and some auto-immune diseases. Taking ibuprofen together with it can be hazardous as this interaction causes an alarming rise in levels of methotrexate buildup in the body.

After an organ transplant, the body’s immune system may decline the new organ. To prevent that, you may be administered tacrolimus for a while. Kidney damage may occur when Ibuprofen is taken alongside tacrolimus.

If you are taking these medications or any other drugs, you should tread with caution when taking ibuprofen. Seek your doctor’s approval if you wish to avoid unwanted ibuprofen side effects.

Halting the intake may lead to minimal ibuprofen side effects since the drug is not addictive. However, you cannot deny the risk of mild ibuprofen withdrawal symptoms.

Although the following list of symptoms is not exhaustive, ibuprofen withdrawal may cause:

Find The Way Towards Recovery

It is necessary to ensure that you are not abusing the medication. Patients are advised to use a maximum of 800mg of Ibuprofen at once and no more than 2400mg of Ibuprofen per day. In case you become dependent on ibuprofen, it is important that you halt this addiction.

It may be hard for the first few days or a week after stopping the oral intake of Ibuprofen. You may have to combat chronic headaches that are one of the ibuprofen side effects of your sudden withdrawal.

But once you start to build an immune power to fight through the ibuprofen withdrawal headache, things slowly go back to normal and the pain eventually disappears. To speed up the process under medical care, find the best addiction treatment center in your area today.

Consuming about 800mg, 3 times a day can be okay for a short duration of time, but when the time prolongs more than a month then it is absolutely necessary to consult a physician. It is not advisable to consume ibuprofen over six weeks if you have heart disease.

If you consume ibuprofen, more than the level you were instructed it actually damages your stomach and intestine. Max of about 3200 mg/day (4 max doses) were advisable to consume in a day.

It is advisable to contact your doctor when you stop intaking ibuprofen and start having the following symptoms like tiredness and nausea. It may lead to Liver Failure

Acetaminophen is advisable to consume as the safest oral OTC painkiller, either on a daily basis or for frequent use in most older adults. The brand name of acetaminophen is Tylenol. Outside the U.S, Acetaminophen is usually called paracetamol

Usually, a heavy dosage or a long term use of medicines such as aspirin, ibuprofen, naproxen can lead to chronic interstitial nephritis- a chronic kidney disease. It is not recommended to consume painkillers such as NSAIDs and a higher dose of aspirin for those who have decreased kidney function.

According to U.S studies, many adults who consume ibuprofen and other NSAID(Nonsteroidal anti-inflammatory) drugs too much, have an increased risk of internal bleeding and heart attacks.

Doctors have actually known for years that consuming NSAIDs (nonsteroidal anti-inflammatory medications) which includes ibuprofen and naproxen may increase the risk of heart attack and stroke. But even those who don’t have heart disease or issues such as high blood pressure may be at a greater risk as well.

Telogen effluvium is when some stress causes hair roots to be pushed prematurely into the resting state. Telogen effluvium can be acute or chronic. … Most hair loss from medications is this type and causes include retinoids, beta-blockers, calcium channel blockers, antidepressants, and NSAIDs (including ibuprofen).

Instead of NSAIDs, you can consume Acetaminophen(brand name Tylenol) which targets pain rather than inflammation. Stress can be a major factor for developing headaches, that can be reduced using many relaxation factors such as long baths along with some meditations.

11 thoughts on “Is Ibuprofen Addictive? Facts & Side Effects”