Addicted To painkillers: Opioid Use Disorder And Treatment 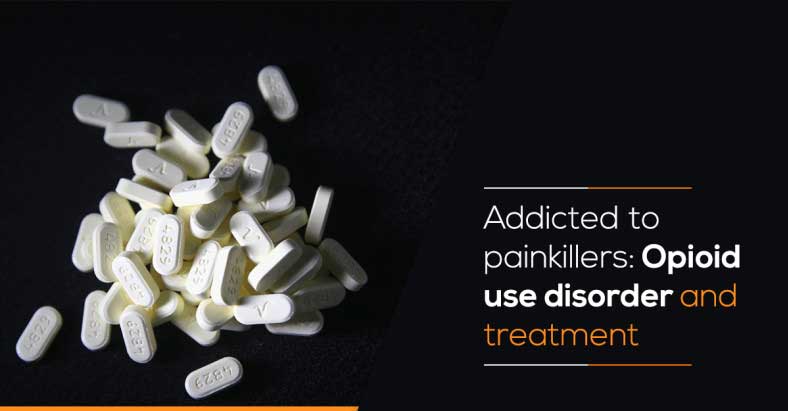 What Is Opioid Use Disorder?

Here are the signs of opioid use and symptoms of drug addiction:

If a person tries to stop the opioid use abruptly, the individual may experience withdrawal symptoms which includes:

How People Get Exposure To These Kinds Of Opioids?

Most people approach their doctor for their ailments and the doctors prescribe painkillers to alleviate pain. In most cases, opioids will be prescribed to people as their pain medication, which doctors call it a narcotic or opiate. These painkillers are derived from the “joy plant” named opium poppy. The medicines made from the opium poppy can not only relieve the pain but also give you a pleasant feeling (euphoria). Due to this, people begin abusing this medication and take a high dose to get a high feeling.

In most of the countries, they banned the use of these pain relievers or limit the usage of such drugs, since they have many side effects, which majorly affect the internal organs like liver, kidney, etc. In America, millions of people suffer from opioid use disorder. People begin using opioids for purposes other than those intended by the doctor. The strong desire for this medication turns into abuse and eventually, the users become addicted to painkillers. This article will provide you with valuable pieces of information on how addiction can affect you and what is opioid use disorder treatment.

Some of the Painkiller Substance

Opioid – The term opioid refers to natural and synthetic substances, which mainly acts on three of the receptor systems (mu, kappa, delta). The way of consuming it involves:

Heroin – Heroin is the opioid most commonly abused by injection. Its chemical name is diacetylmorphine, which is a derivative of morphine, another commonly used opioid. Other terms for heroin include dope, horse, smack, china white, junk, and tar.

Opium – It is obtained from the opium poppy, which contains morphine and codeine. It is consumed through smoking, and it can be eaten, too. The usage of opium is very low in the United States and it is the most commonly abused substance in Asia and the Middle East.

Endorphin – It is often referred to as a subclass of opioids, which contains endogenous peptides that relieve pain.

Prescribed Opioids – Medications containing opioids were prescribed principally for pain relief. But they have the potential for abuse and addiction, hence the usage of prescription drugs is monitored and regulated by the Controlled Substances Act in the United States.

Opiates – It is also referred to as a subclass of opioids, which contains alkaloid compounds that are naturally present in opium poppy.

Medical professionals who have high exposure to these kinds of drugs, for instance – Oxycodone and hydrocodone, are at a higher risk of opioid use disorder as these prescribed drugs have the highest chance of misuse and abuse.

Science and medicine have improved the lifespan of the human race. Whenever a positive thing emerges, there might be some ill/side effects too. People depend upon medicines for they are well-meaning, especially painkillers that help to get rid of pains.

People may not analyze or think about the harm they are receiving because of consuming those opioids. They just need immediate pain relief. Many of them don’t know that pain killers are never going to treat your injury or repair your body parts completely, but they only subside your pain for the time being.

Those who consume opioids on a regular basis have analgesic and central nervous system depressant effects as well as the potential to cause euphoria. The OUD (Opioid Use Disorder) involves the misuse of prescribed or diverted opioid medications. It is typically a relapsing chronic illness, and more significantly, associated with the increased rate of morbidity and mortality. To withdraw from this addiction, you will need long term maintenance to avoid falling into relapse. The for opioid use disorder treatment includes the usage of agonist and antagonist opioids or some addicts even go for nonmedication or abstinence-based treatment.

Diagnosis Of Opioid Use Disorder

With long-term opioid use, the individual has significant physical and mental impairments. Your doctor will decide whether you have opioid use disorder or not based on certain factors. If a person takes more opioids than intended, they may start spending more time seeking opioids and indulge in social withdrawal, increased tolerance, strong cravings, and will be unable to stop opioid use. Not getting their hands on the drugs will show opioid withdrawal symptoms.

Those who are using these painkillers for a long time can be observed with poor health or they might look physically weak. Some of the more specific medical conditions which are the result of the signs of opioid use are:

They are easily affected through contaminated drugs and the usage of non-sterile injections, shared needles or syringes. Through these modes, there is a higher risk rate of bloodborne pathogens. And this results in many diseases like HIV, hepatitis B, and hepatitis C.

Treatment For Opioid Use Disorder

Treatment for opioid use disorder is based on how long the individual abused the drug and the severity of the addiction. The first step is to stop the individual from being dependent on the drug. For this, detoxification is done; it can be performed in an outpatient or an inpatient rehab Omaha to make the patient abstinent. Based on the severity of intoxication, the individual experiences withdrawal symptoms. The doctor may prescribe some medications, namely methadone, and buprenorphine, to ease the withdrawal symptoms.

Opioid replacement therapy is sometimes also called opioid substitution therapy, which makes use of opioid medications that act as a substitute for opioids that were already taken, and these help in reducing the withdrawal symptoms. The medications used in this therapy suppress the cravings for opioids. This replacement therapy stabilizes and maintains the patient’s condition, thereby, allowing them to proceed with further treatments through rehabilitation.

The dosage of the medication given in the replacement therapy is noted by the doctor, and it does not alter the chemical reactions of the brain. However, replacement therapy alone is not sufficient; the patient has to go through individual counseling and other behavioral therapies to get sober and prevent relapsing. For the best opioid use disorder treatment programs, check the addiction centers listed by the Addiction Aide website.

When you are addicted to painkillers, you might feel good and you often enjoy the feeling of being relaxed or away from any sort of pain. But the consequences you are going to face will push you into more trouble. It’s not too late to withdraw, you might get some help and try to be away from all these opioids and etc. Try to have a good work-life balance, healthy eating, and more. Stay Sober! Be away from self-abuse!

7 thoughts on “Addicted To painkillers: Opioid Use Disorder And Treatment”