A 2014 study by the National Survey on Drug Use and Health (NSDUH) says that 1 in every 12 American adults battle substance abuse. Substance abuse is a complex health and societal problem which needs effective and careful treatment. One of the effective ways to treat drug abuse and other sorts of addictions is Yoga. By practicing Yoga, one can manage and connect the mind, body, and breath in one arch. This can largely help in one’s road to recovery. Here in the blog, we listed 10 yoga poses which you can practice in 12 step program for depression or any other form of addiction to help you on your path to completely getting past your addiction. 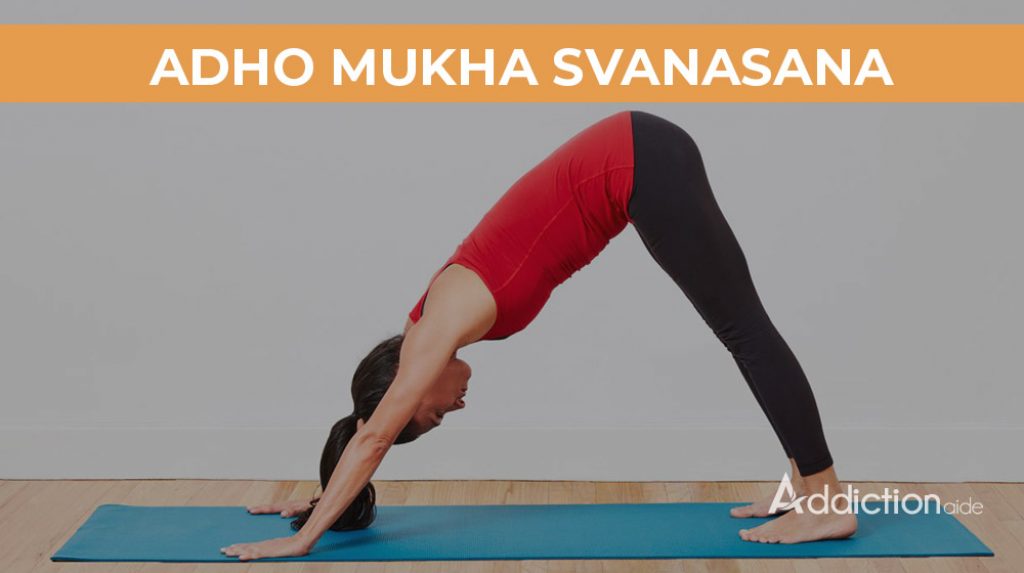 The downward-facing dog pose is one of the most widely known exercises or yoga poses around the world. It is also a part of Surya Namaskar, Salute to the Sun. Conventionally, this asana is expected to stimulate a number of chakras, including the Manipura and Ajna chakras. Activating the Manipura chakra through Adho Mukha Svanasana is thought to eliminate fear and insecurity, while the Ajna chakra stimulates perception and inspiration. By reversing gravitational action, Adho Mukha Svanasana gets blood and body fluids flowing in the opposite direction since it is an inverted pose. The inversion is also thought to provide a different perspective on an emotional level, improve in confidence level. Calming the brain, relieving stress and depression, preventing osteoporosis are some of the main benefits of performing this asana. 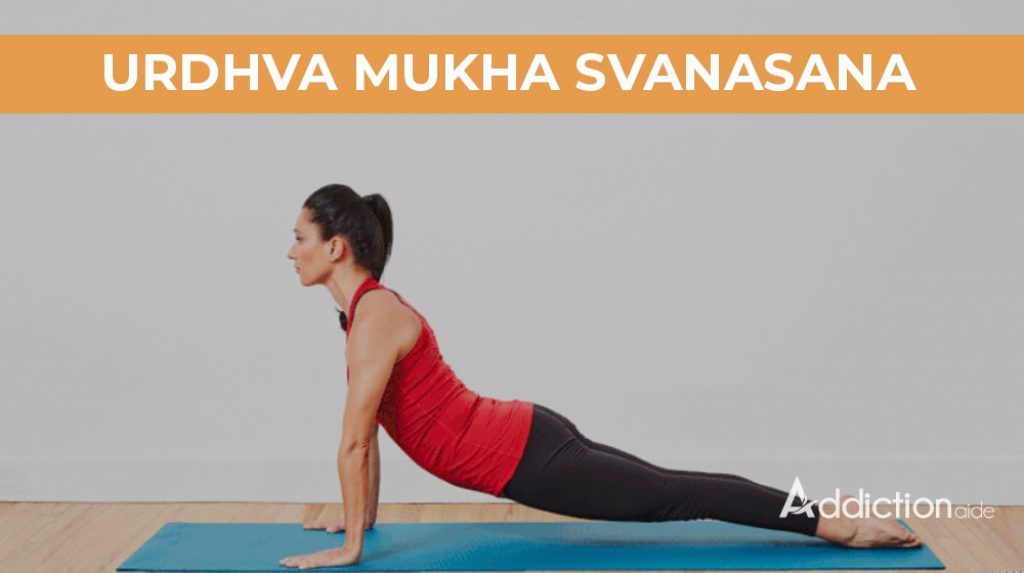 This posture is one of those introduced by Krishnamacharya in the 20th century. Urdhva Mukha Svanasana is one of the most effectual yoga poses accountable for building strength, awakening the upper body, preparing the body for intense backbends and keeps your overall body better and healthy or well-being. It also coincides with Bhujangasana (cobra pose), the distinction being that in the latter pose, the lower body remains pressed into the ground, while in the former, only the tops of the feet touch the floor. These two asanas are simple backbends and are performed during Surya Namaskar. Traditionally, Urdhva Mukha Svanasana is believed to stimulate the Anahata chakra, opening the body to compassion, affection, and gratitude. The energy from this chakra also creates a greater connection with the global community. The upward-facing dog pose strengthens the back, arms, and wrists, stimulates the abdominal organs and helps relieve depression. 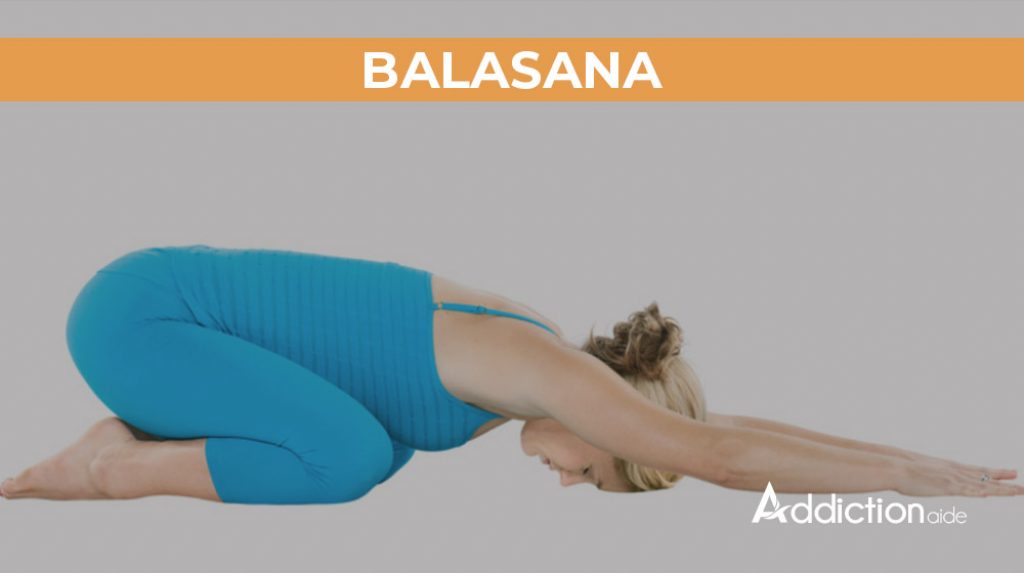 Balasana or the child’s pose is a relaxing pose that can be inserted in between other difficult poses as a recovery pose. Balasana is named so because the performer assumes the fetal position of a baby before childbirth. Many scriptures even say that one may be able to connect to their memories inside the womb. While the West believe bowing one’s head signals surrender, it is considered a noble act of humility in India. Balasana activates the Ajna, Swadisthana and Muladhara chakras. An important benefit of performing Balasana is that it cures restless leg syndrome. While performing Balasana, the spine remains relaxed in forward-fold hence one can focus on breathing and concentrating on the chest and abdomen towards the tummy. Balasana can be utilized to treat severe back pain, insomnia and to minimize stress and improve in sleep. 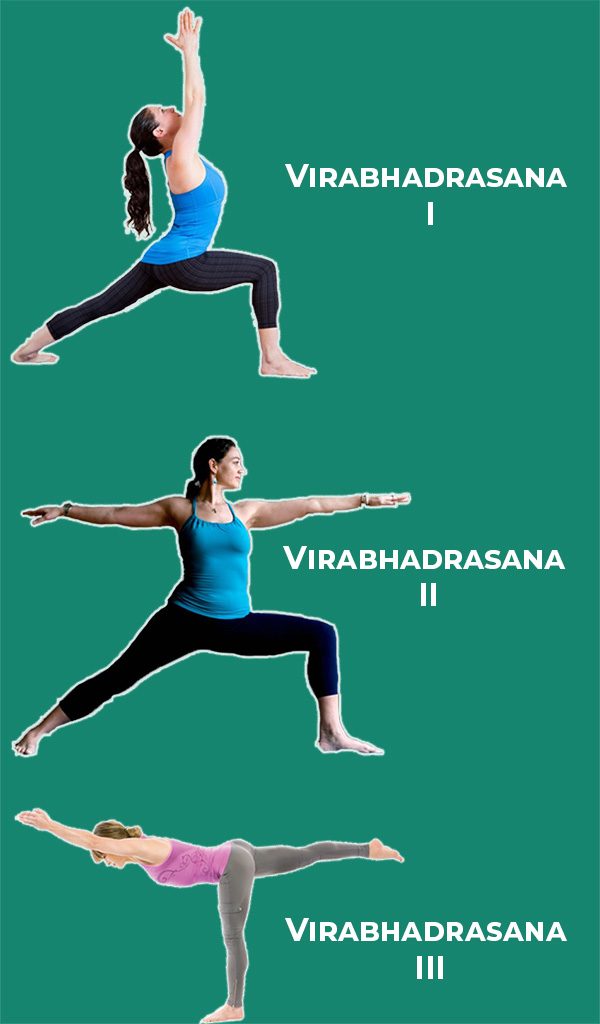 Arguably the asana with the heaviest mythological story, Virabhadrasana or warrior’s pose is a trio of lunging stretches memorializing the exploits of the great warrior Virabhadrasana. Yogis are non-violent people, a fact that would create a stir to why a yoga pose would be named after a warrior. The answer to that being, Virabhadrasana is a spiritual warrior who fights the evil of avaidya (self-ignorance) which is the ultimate cause of all our sufferings.

According to Indian mythology, Virabhadrasana is an incarnation of Shiva himself created to destroy Daksha, the son of Brahma. Daksha was unsupportive of the marriage of Shiva and Sati, his daughter, due to which he cut her off from the family. Sati, seeking the validation of her father, ends up walking on fire and killing herself. Virabhadrasana is created by Shiva to seek revenge. 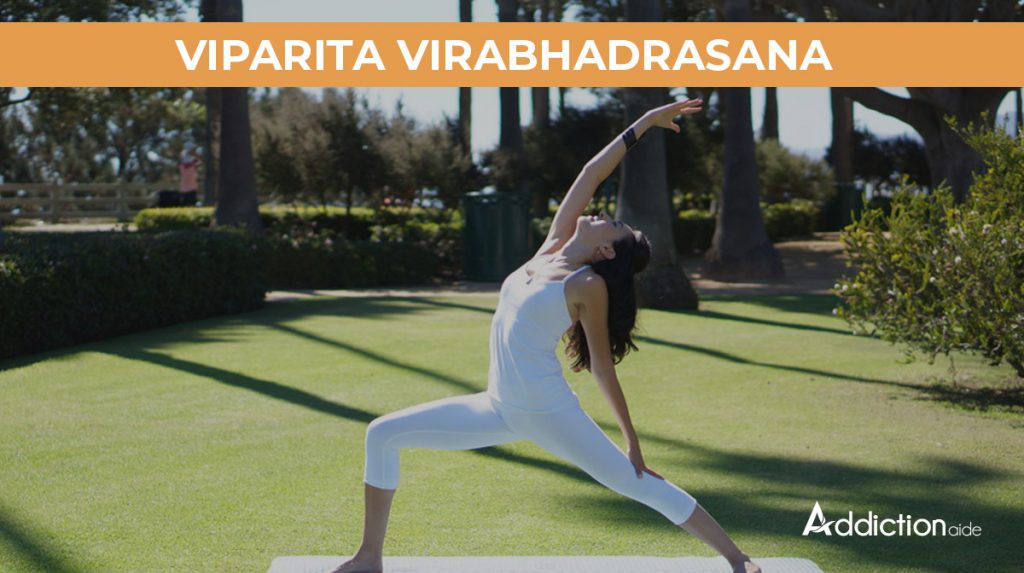 An extension of the Virabhadra II pose, it can be entered by arching the back and the backhand reaching the corresponding leg and the forehand pointing up to the sky. This pose is a modern adaptation of Virabhadrasana II, which could’ve been created as early as 2000. The general perception of a warrior is that of violence and warfare. The power of the reverse warrior pose is to turn around this symbolism and to think noble of warriorship. This idea of a peaceful warrior is shown to students to teach them that love and compassion are just as important. This pose is supposed to balance 3 chakras Muladhara, Manipura, and Ajna. Some benefits of yoga and meditation can be completely surprising where you can get rid of addiction and mental illness without any kind of medication and the daily practice of this pose can energizing our body, building perseverance, and improves our focus. 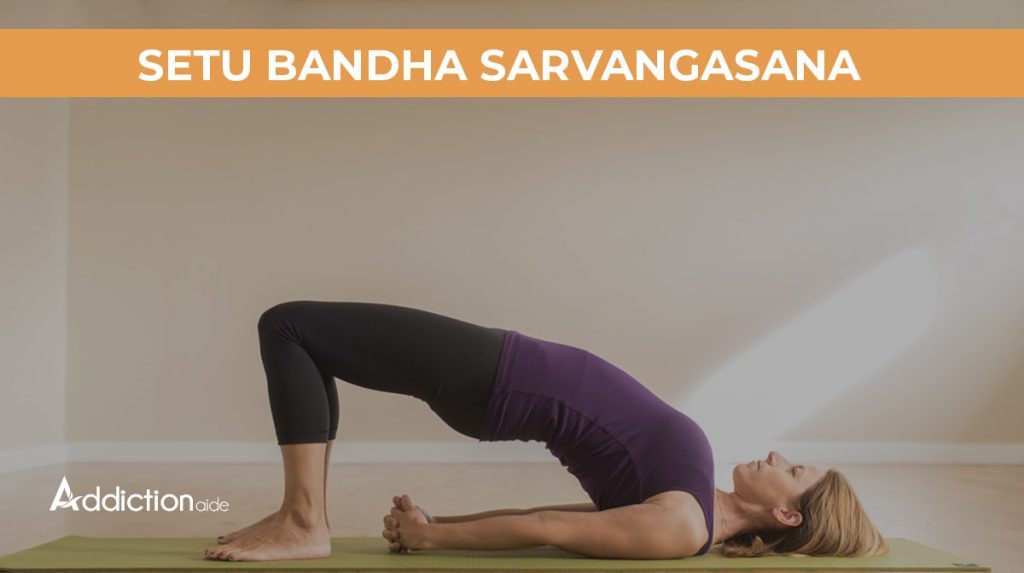 A bridge is something that connects two places be it physically, virtually or psychologically. It renders the opportunity to cross over from one place to another. By creating a bridge with the body one can create a path between the place one is in, and the place one wants to be in, hence inviting transformation. Bridge pose also stimulates the Muladhara (root), Visuddha (throat) and Anahata (heart) chakras. It is believed that the root chakra helps one stay connected; the throat chakra enhances one’s communication and eloquence; and the heart chakra encourages kindness, compassion, and healing. The bridge pose gets rid of anxiety, relaxes the mind, relieves negative emotions and helps a great deal in improving mental health. 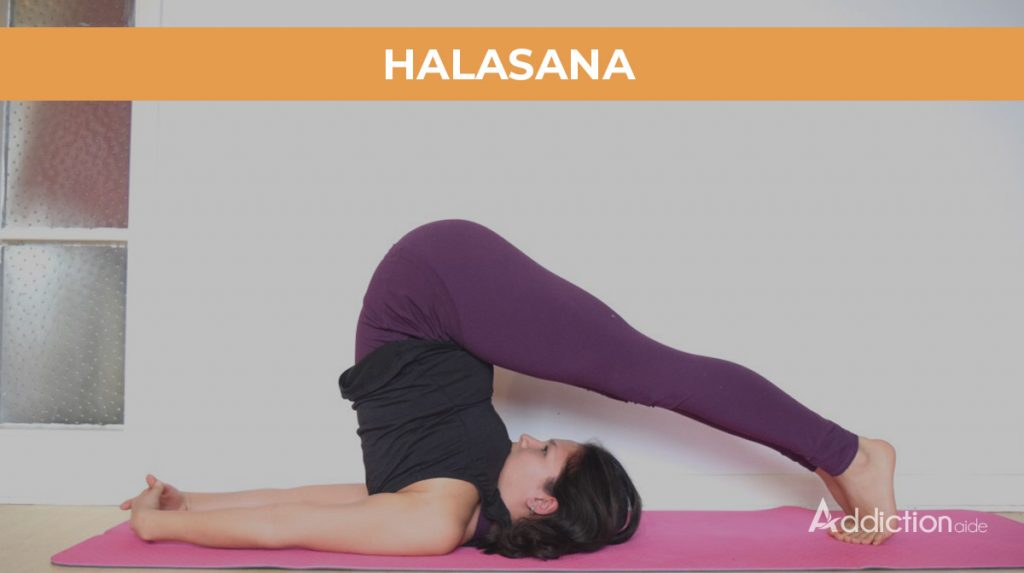 Halasana or plow pose gets its name from the shape of the body when performing this pose. The body assumes the shape of a plow, with the hands on the ground and hip above the head and toes touching the floor behind the head. The history of this pose goes back to the Indian scripture Ramayana. King Janaka, a karma yogi finds a small girl plowing in a field when he was working on the fields like any other farmer. This girl was named Sita, who later grew up to become Ram’s wife. This symbolizes that hidden treasures can be found with a plow. Halasana presents solid opening benefits for the throat and heart chakras. This is different from the usual opening of these chakras, as in Halasana, they are guarded in the front and exposed at the back. 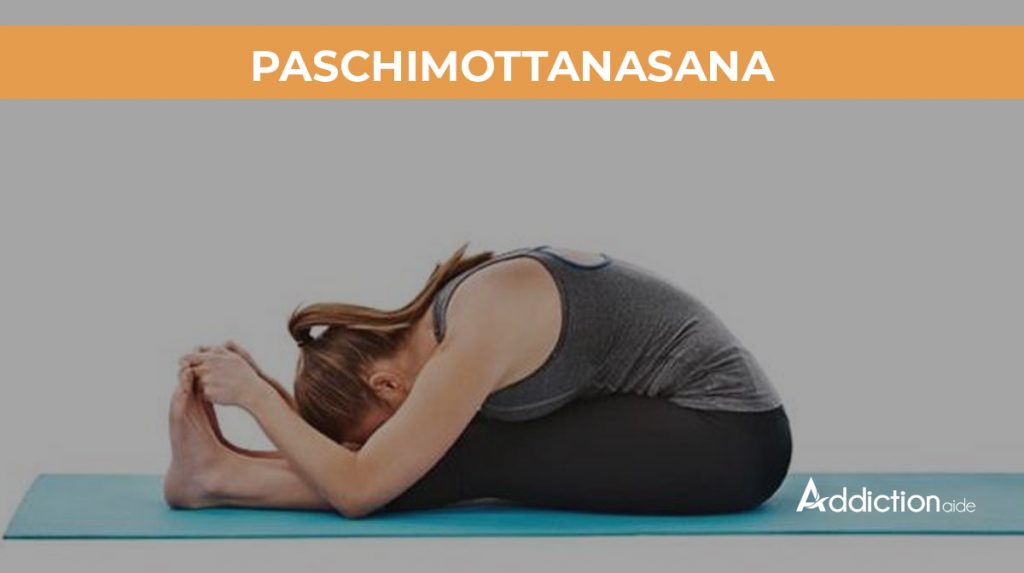 Paschimottasana or Intense Dorsal Stretch is one of the asanas in Modern Yoga. The physical purpose of Paschimottasana is to lengthen the backside of the body. While performing this pose, the whole of the backside of the body ie. head, neck, back, spine, hamstrings, and calves get stretched to the fullest. Hence this pose is a relieving solution for respiratory and kidney problems and adrenal exhaustion. Paschimottanasana is regarded to be a calming posture for the mind and nervous system. It may be therapeutic for anxiety and depression. This pose naturally promotes introspection and inner growth. Due to the challenging nature of the pose, one cannot commit to fully bending over. One can find the balance between effort and surrender hence detaching oneself from the end result. 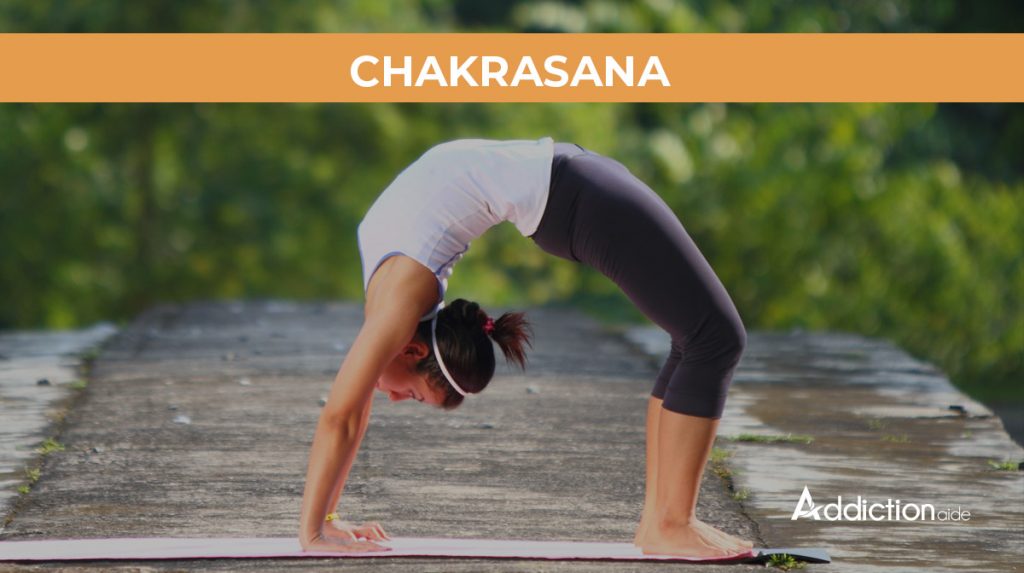 Chakrasana or Urdhva Dhanurasana (upward facing bow pose) is one of the 84 asanas of Lord Shiva’s classic yoga referenced in the HathaRatnavali around 1600 CE. Mythology has it that Vishwakarma, the grand architect of the universe had a daughter, Sanjana who fell in love with the sun god Surya. Since Surya was too bright Sanjana couldn’t be close to him. Hence Vishwakarma cut down a few rays of Surya and spun them into a chakra. Chakrasana is the pose of the ultimate circle. The body forms the shape of a chakra or wheel when performing Chakrasana. It aligns all the 7 chakras in a complete circle, thus providing one with the ultimate pose which unlocks courage, compassion, and radiance in our mind and spirit and helps in relieving emotional disturbances. 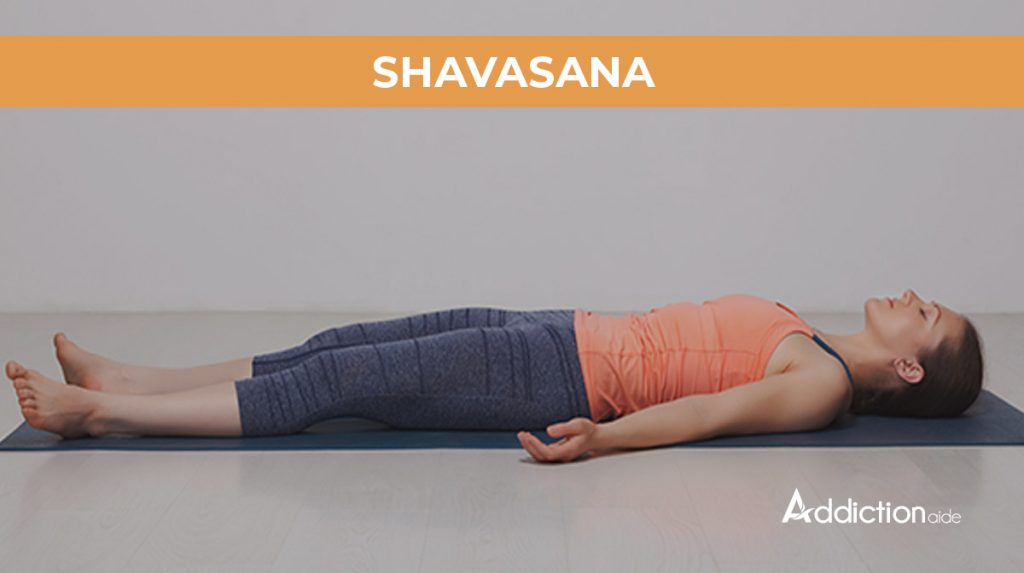 Savasana can be achieved by lying down flat on one’s back and relaxing the entire body and mind. It may look very simple, but it is mentally challenging as we have to focus to keep our mind free of thoughts and concentrate on connecting with our bodies. It is given the name Savasana not only because of the physical position but also since it prepares one for the ultimate relaxation, death. This pose has been proven to helps the body to accept the neuromuscular changes that the body underwent during the session. It relaxes every muscle of the body thus making it the ultimate finishing pose. Fatigued or tense muscles get relaxed, the nervous system calms down and serenity prevails in the body.

Yoga is considered Science. Yoga stimulates the 7 chakras (energy centers) of the human body. By stimulating and balancing the 7 chakras, you would be able to attain peace with your body and surroundings. Practicing the 10 exercises asanas mentioned above daily would offer physical and mental clarity about your life. So put on your yoga pants and go beat your addiction!

Addiction aide provides confidential drug abuse assessment and treatment placement tailored to your individual needs. Achieve Long-term recovery, give us a call or fill out the form below and we will respond as soon as possible.

Dont go through the process of receover alone.Get in touch with someone who can help.

No matter where you live,There is a drug rehab center that can help you overcome your addiction

Add or Claim your Directory Listing